Magic and Miracles at MDLKC!

As she does every year, Mrs. Reynolds came up with a theme for the 2019-2020 school year. The theme for each school year jumpstarts our school year, is taught to the students, drives instruction, and influences every part of our school day. This year there was no way Mrs. Reynolds could have known just how powerful her choice, Magic and Miracles (M&M) would actually be.

In August, Mr. Brian Pudelka, husband to Mrs. Amiee Pudelka, kindergarten teacher, passed away after a hard fought battle with cancer. Our Kennett community was tremendous in supporting the family throughout this process. When it came time to start healing, one Kennett family anonymously decided that they wanted to do more. They decided the Pudelka family needed some extra “magic!”

On October 23rd, Mrs. Amiee Pudelka and her two boys received the magic. The school gathered in the multi-purpose room not knowing they were about to be a part of the biggest surprise our school has seen to date. There was a previously scheduled assembly so the stage was set for the secret surprise to be carried out. After the assembly, Mrs. Reynolds called on a few students and asked them to share their most magical place they like to visit and/or be. Students answered in acceptable ways home, school, the playground, etc. Unbeknownst to the teachers, they also became part of the big reveal. Ms. Bogino answered, Disney World, Mrs. Drago answered Virginia Beach, then came Mrs. Pudelka. Mrs. Pudelka answered with “Dutch Wonderland.” At this point the surprise was about to be revealed but first, Mrs. Reynolds brought in Mrs. Pudelka’s son, Jonathan who attends New Garden. Ecstatic but puzzled, she embraced him. He was asked the same question. “Where is your magic place?” He answers, “Disney world.”

At this point, only the P-Pod teachers knew where any of this line of questioning was going. I am sure you are on the edge of your seats reading this. The big reveal… 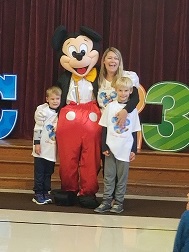 Mrs. Amiee Pudelka and her sons meet Mickey Mouse to be told they are going to disney world!

Mickey Mouse entered the gym and the crowd went wild! There were cheers and jeers! There were smiles all around. Magic and miracles were coming alive right in our gym. The students were amazed, they were thrilled, they were completely unaware of what was about to be announced.

Mrs. Reynolds announced to the whole school that a family in our Kennett community was sponsoring an all-expense paid trip to Disney World! When Disney World found out what was being planned for the Pudelka family, they joined in and donated vouchers for all of their meals.

What a year to remember for MDLKC! Our community truly is the greatest place on earth, even compared to Disney World.

Our gratitude and appreciation goes out to the kind and very generous gift the anonymous family donated. They truly personify the meaning of our theme… Magic and Miracles (M&Ms).

P-Pod celebrates Magic and Miracles with Mrs. Pudelka, her sons, and Mickey Mouse.